How the Restoration of Fort Ligonier Began

The first pieces of Fort Ligonier land were preserved by the Daughters of the American Revolution in 1934. By 1947, the first archaeological dig was conducted on the fort grounds and researchers discovered 18th century maps in England that showed intricate details of the original fort (1758-1766). These efforts inspired the reconstruction of Fort Ligonier that has been ongoing since the mid-twentieth century.

The Reconstruction of Fort Ligonier

Eight acres of the original site of Fort Ligonier have been preserved, with the subsurface features restored and the above-ground elements reconstructed. The inner fort is 200 feet square, defended by four bastions and accessed by three gates; inside is the officers’ mess, barracks, quartermaster, guardroom, underground magazine, commissary, and officers’ quarters. Immediately outside the fort is General Forbes’s hut. An outer retrenchment, 1,600 feet long, surrounds the fort. Other external buildings include the Pennsylvania hospital (two wards and a surgeons’ hut), a smokehouse, a saw mill, bake ovens, and a blacksmith’s forge.

Fort Ligonier suffered an immeasurable loss when Brad Mooney passed away in March 2021. Since the late 1980s, Mr. Mooney of Heritage Restorations worked on the latest and most extensive phase of the fort’s reconstruction along with recreating the artillery train of the 1758 Forbes Campaign. Mr. Mooney’s work at the fort began with reconstructing the outer retrenchment, hospital, officers’ quarters, and the Fascine Cannon Battery. The vital preservation projects he spearheaded helped develop Fort Ligonier’s reputation as the finest reconstructed French and Indian War fortification in America.

“Brad was recognized nationwide as an expert in the repair and reconstruction of completely accurate renditions of 18th-Century American stone and log structures and dwellings, said Charles A. Fagan III, Fort Ligonier Board Trustee (Emeriti). “Brad’s vast historical knowledge provided Fort Ligonier’s staff with answers to complex historical questions. He considered the fort to be “’his world.’”

In honor of Brad Mooney's legacy of excellence for maintaining Fort Ligonier’s accuracy, the Fort Ligonier Board of Trustees has established The Brad Mooney Historical Restoration Fund at Fort Ligonier. If you would like to make a donation in Mr. Mooney's memory to support Fort Ligonier's ongoing preservation efforts, please go to the donate page of our website. 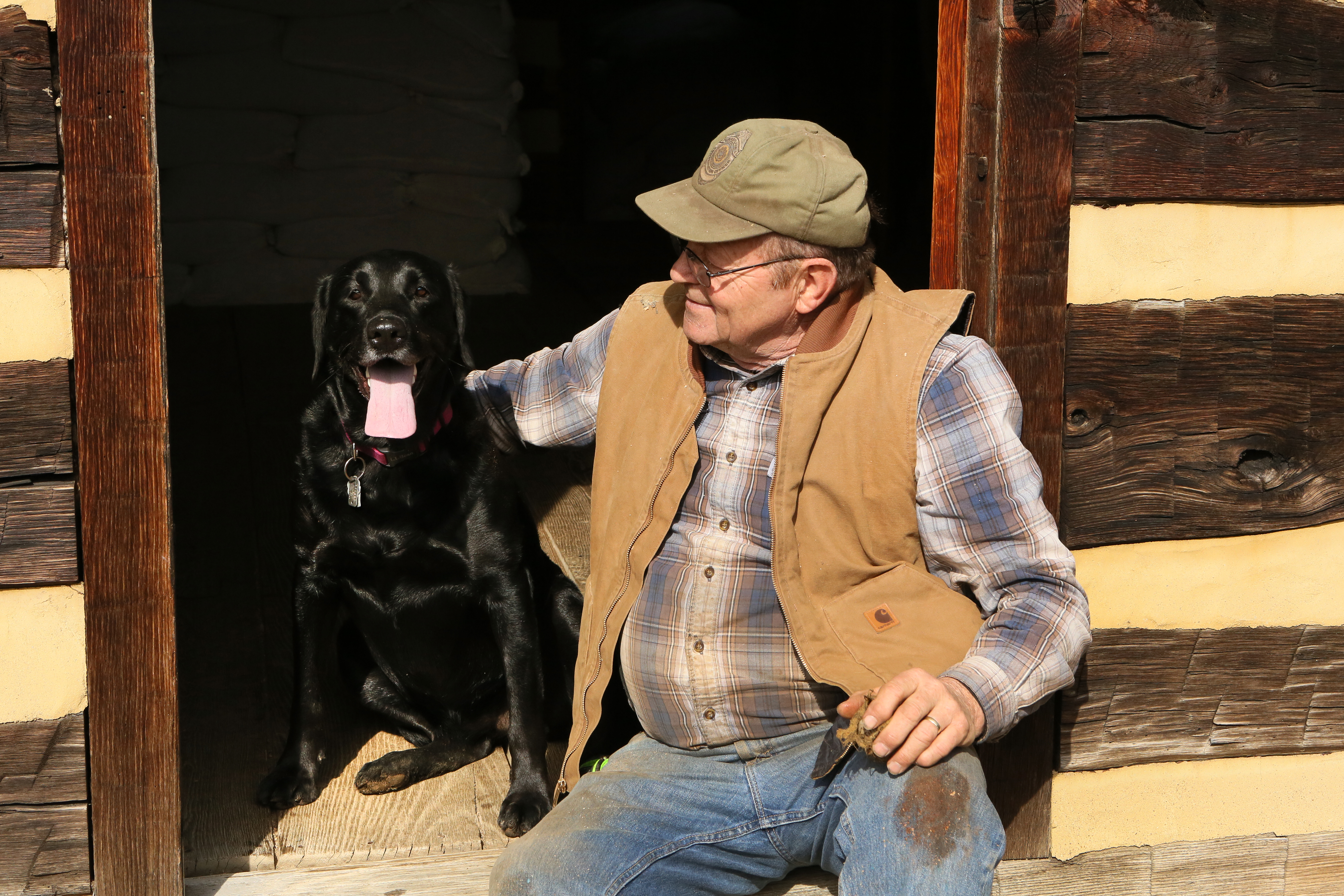 Any visitor to Ligonier approaching from the south or west cannot help but be struck by the sight of the log walls and buildings of Fort Ligonier. Decades of Fort Ligonier Association members, community members and staff have strived to protect and preserve this 18th century landmark for generations to come. Great care and planning has taken place over the years to achieve historical accuracy and authenticity of the reconstructed fort. 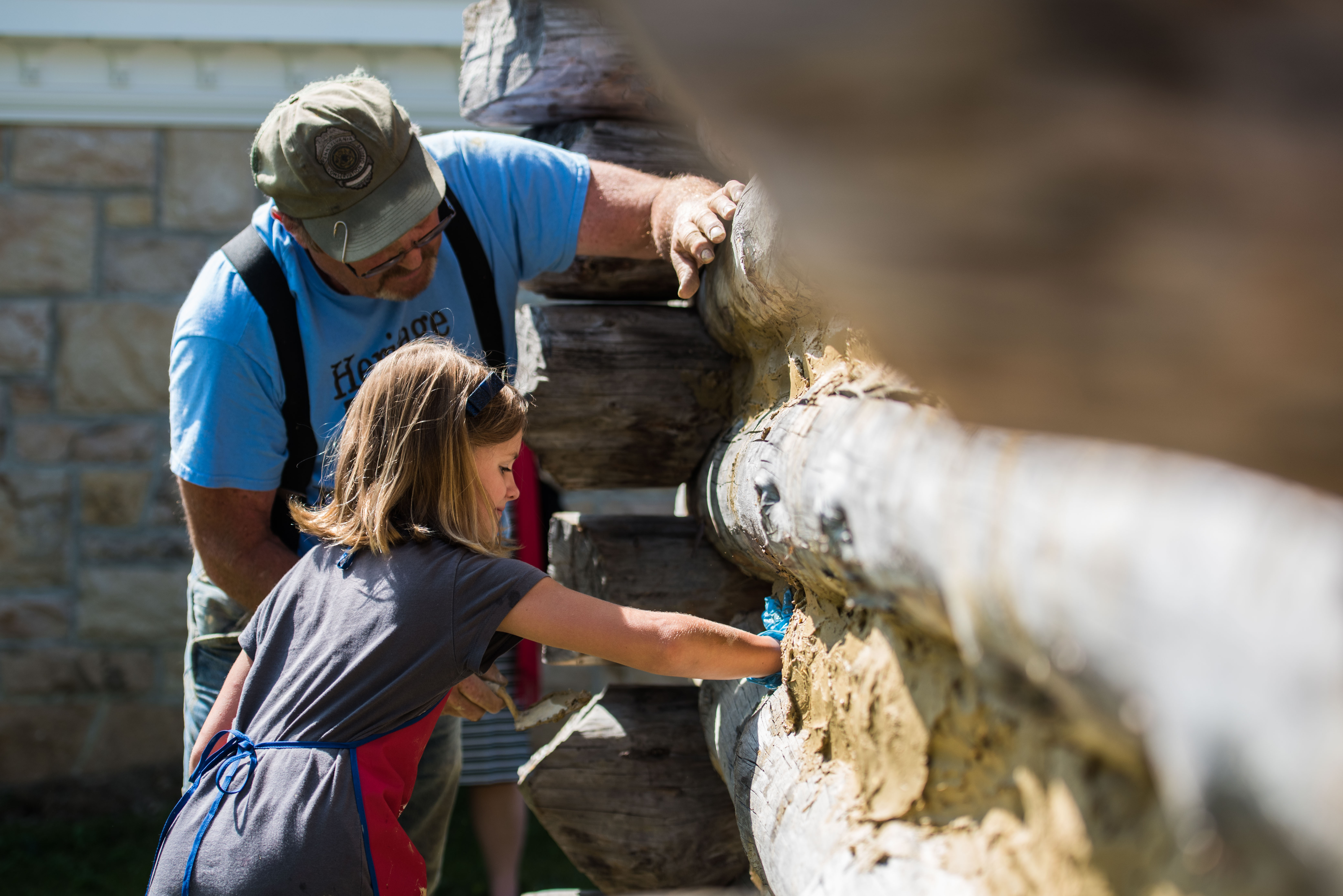 Re-chinking of building to protect against weather 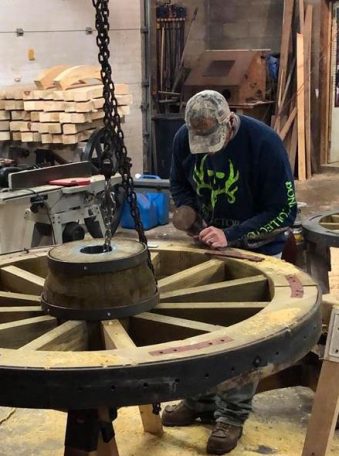 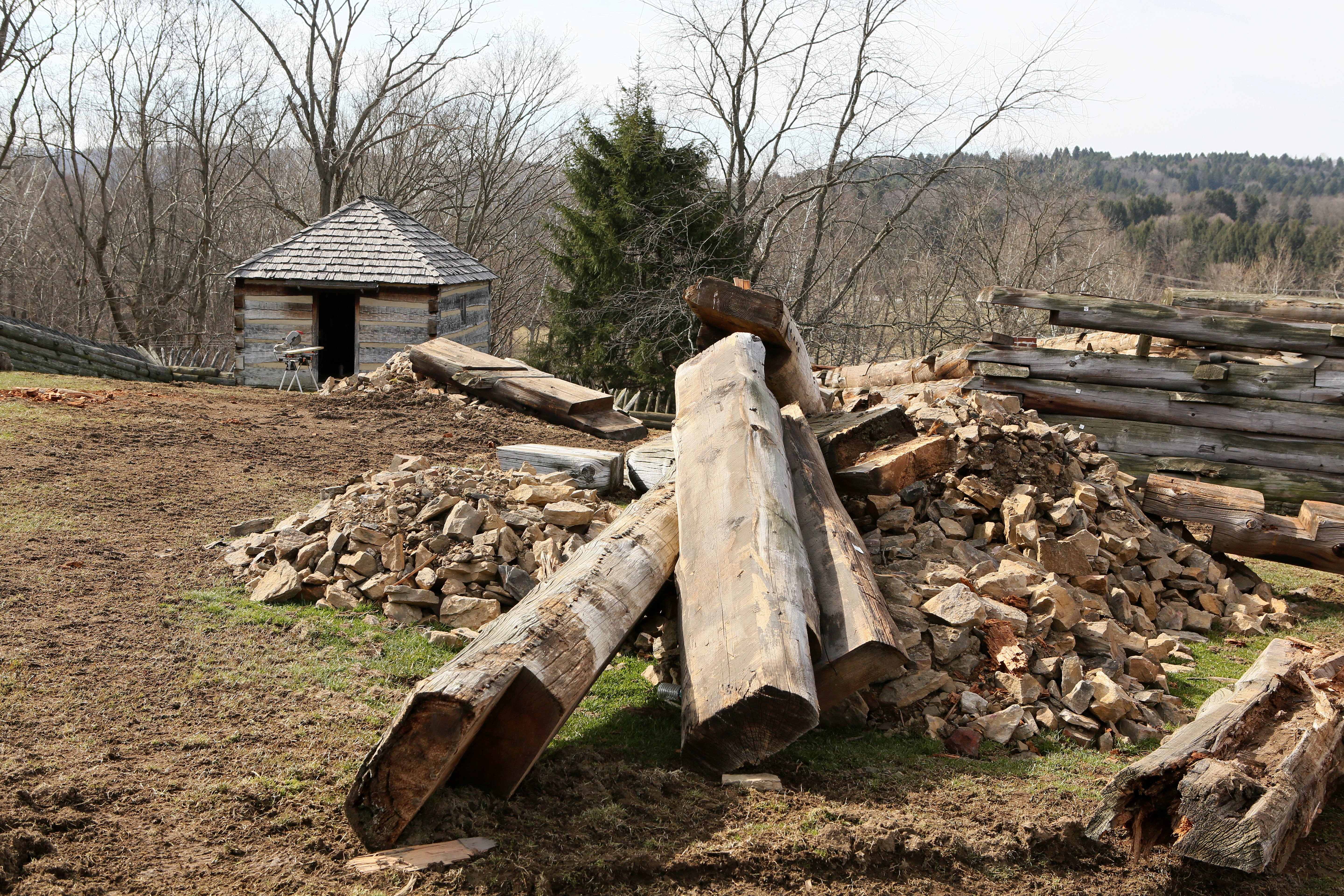 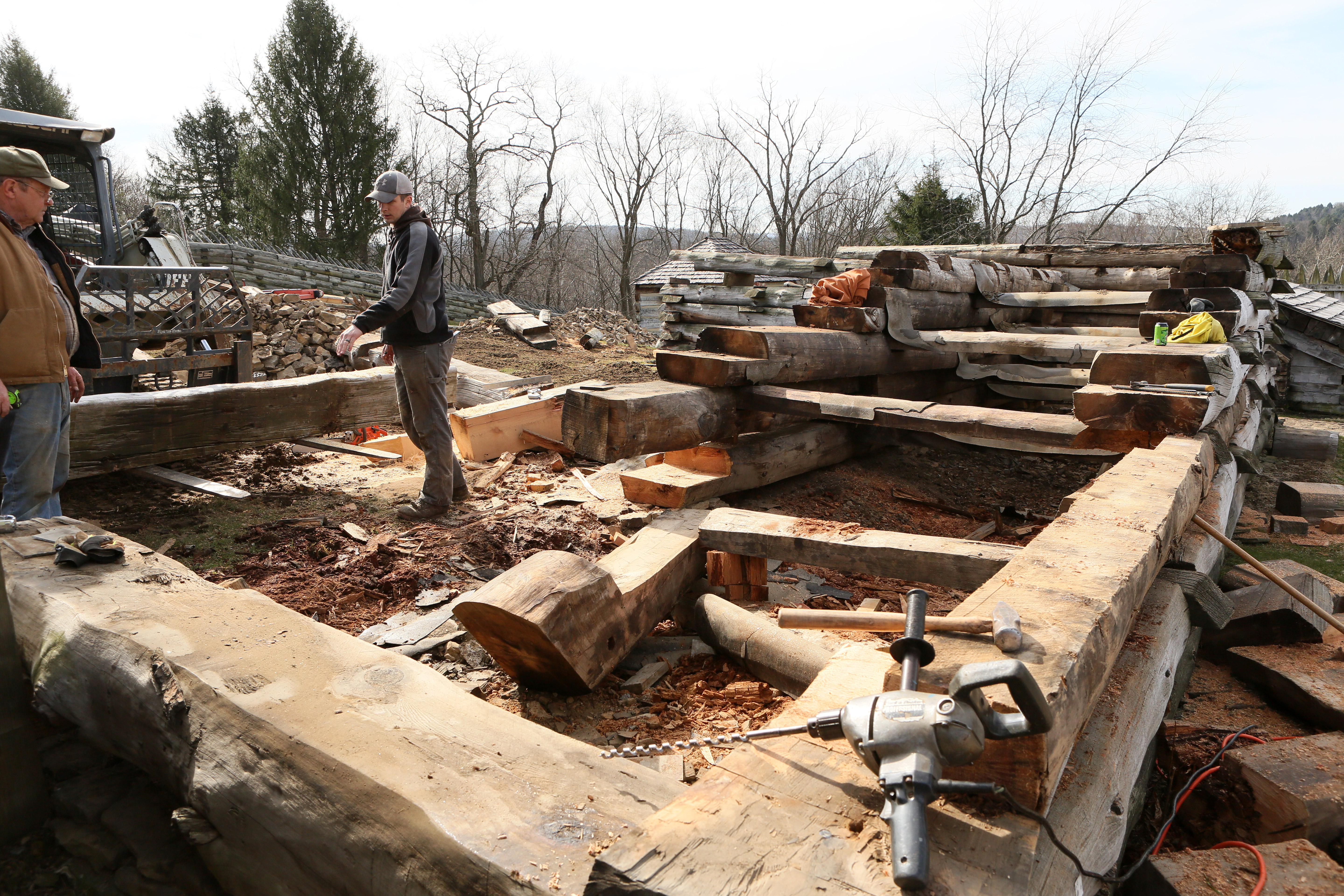 Reconstruction of the wall 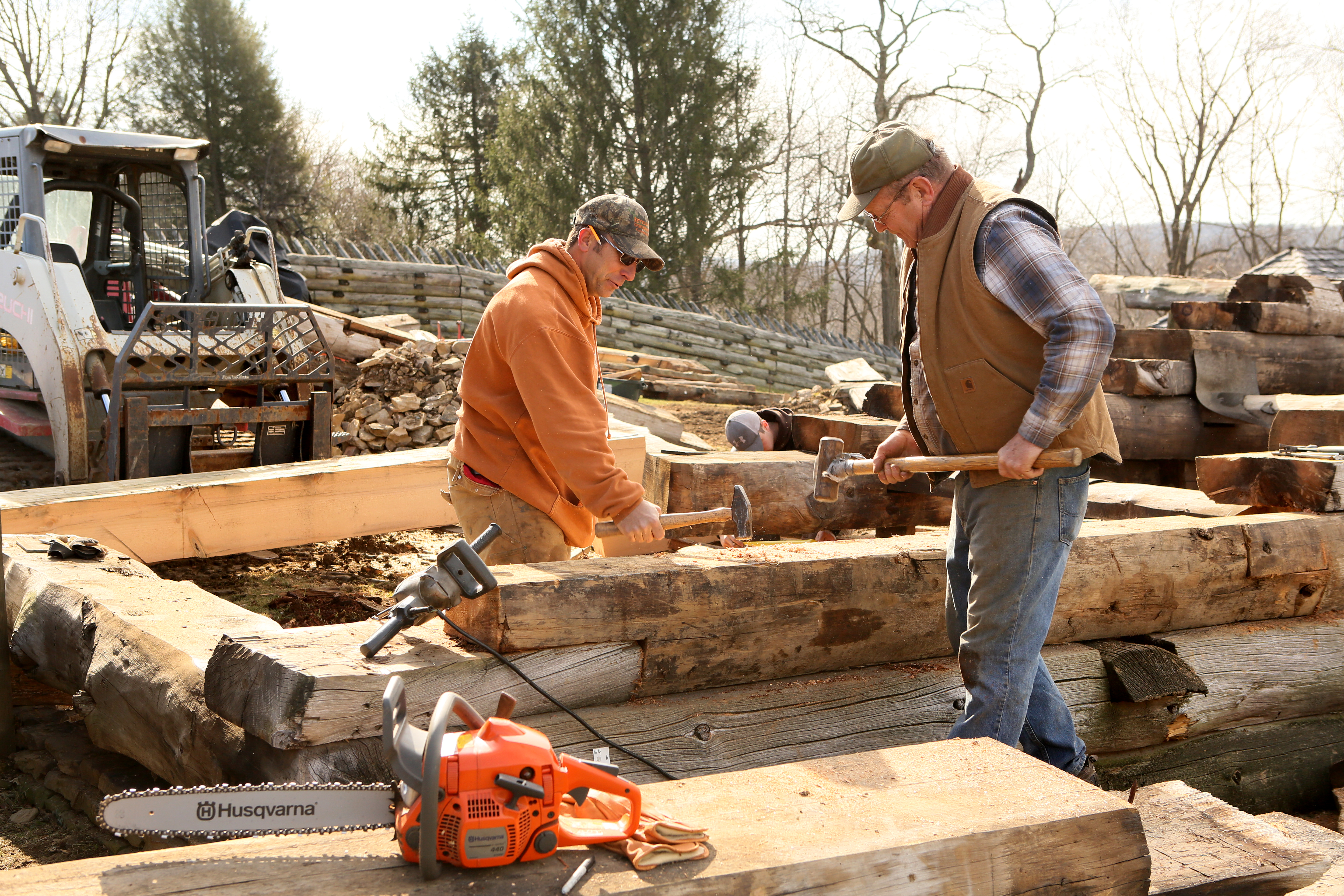 In 1961, archeologists uncovered an apple preserved in a streambed for more than 250 years. See (but don’t taste) this ancient apple in the museum.