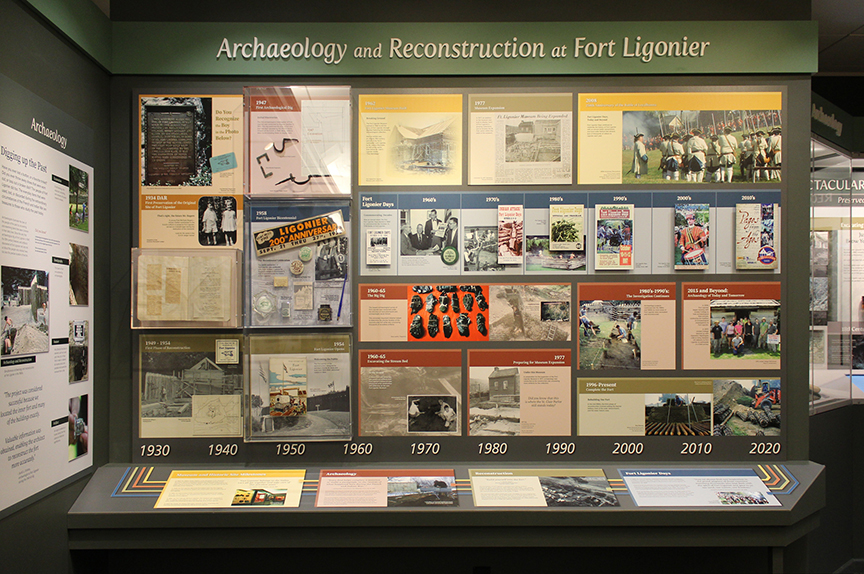 Fort Ligonier welcomes community residents and visitors for free from 4-6:00 pm (donations greatly appreciated). Experience the magnificent historic site that made Ligonier possible and rediscover the stories of when President Dwight D. Eisenhower visited for the Fort’s Bicentennial in 1958, which spurred the popular three-day community celebration.

The first phase of Fort Ligonier’s reconstruction occurred from 1949 to 1969. The reconstruction was guided in part by 18th-century plans for Fort Ligonier discovered in England at the Library at Windsor Castle and in the British Museum. Archaeology also played a major role in the reconstruction by determining the precise location of the original fort and its associated buildings.

The fort has continued to expand over the decades as more original fort property has been acquired. In the mid-1990s another major phase of reconstruction began that eventually included the fascine battery, outer retrenchments and structures in the lower historic area. This effort also included the faithful recreation of artillery pieces, wagons and equipment documented to have been at Fort Ligonier.

Just four years after the initial phase of reconstruction was opened to the public, Fort Ligonier celebrated its Bicentennial. For a week in 1958, the town of Ligonier commemorated this momentous anniversary with exhibitions, contests and exciting community events. The Bicentennial festivities culminated with an appearance by President Dwight D. Eisenhower who visited Fort Ligonier on September 26, 1958.

Following the success of the 1958 Bicentennial celebrations, Fort Ligonier hosted a smaller commemorative event on October 10, 1959. The next year, however, brought back the excitement of 1958’s events when the town of Ligonier hosted the first-ever Fort Ligonier Days. This five-day festival (October 12-16, 1960), was the brain-child of Fort Ligonier’s new manager, Malcolm Tweedy, and was such a success that the organizers decided to make it an annual celebration.